How big is a Trillion dollars?

What happened on Wall Street.

This would have done well in the 80's

Another Zombie film. This one is looking good.
Labels: zombies 0 Comments - Comment now!

In case you are not aware, there is a game that has taken off in Twitter called "Spymaster" It's a game along the lines of the Mobsters type games on Facebook, but it happens on your Twitter account. It's fun, but only until you realize that you have been spamming your Twitter account with messages from the game. :-(

Many Twitter users are dropping friends who have this app installed because they can't stand the spam it's shooting out anymore and have no way to stop the messages. The game gives you access to remove notices, but many are just removing anyone that tweets from the game.

If you have not tried the game, you probably have nothing to worry about except some unwanted "I shot so and so" messages. But if you have played the game, why not drop the game instead of having your followers drop you?

Of course, since the makers of the game don't make it immediately clear how to do so I've outlined the (very easy) steps required below. Fortunately, the makers of the game used the official oAuth connections so removing the game is easy and does not even require resetting the password on your account. It does not appear that you will lose your game progress, but I'd assume that it's possible and even probable that you will, so proceed at your own risk. Of course, if you are here reading this, that probably isn't your main concern.

Step 1: (click on any image for a larger size) Select the "settings" link on the top of your Twitter page.

Step 2: Select the "Connections" tab after the settings page loads.

That is it. You are now less likely to have your account dropped by followers. You'll still get the spam sent by other users who still have the app installed, so your DM feed is screwed unless you drop anyone with the game installed, but at least you won't be spreading the spam yourself.

If you found this helpful, follow me for a while and see if you find me interesting. I'm @synstelien

I received a DM on Twitter that indicated this did not work for one person. After reviewing the process, I find that it does still work, these are still the correct steps for removing Spymaster's access to your account. If you have never "installed" Spymaster, then you won't be able to follow these steps and you have nothing to worry about.

Your friends that still use Spymaster will still be sending out messages which you will continue to receive. Unfortunately, the only way to solve that problem is to stop following those users or send them a DM and educate them on how annoying the game can be.

Everyone wants to re-live the 1970's so bad that they can not be happy just having a global economic collapse, a gas shortage and problems with Iran. Now we have to relive some Swine Flu memories as well. I think I have a scar on my arm from the last bout we had with this virus. So to bring back some "good memories" for you all, here is a great commercial telling you to get your shots! I can't wait to see what the new ones look like!

How have I missed this. Awesome stuff.

I so wish that this movie was real...

I think this guys is on to something.

While looking for domain names, I said "what the heck" and typed in "Twitter" to see what alternatives might come up. Click on the image to enlarge and see what Go daddy suggests: 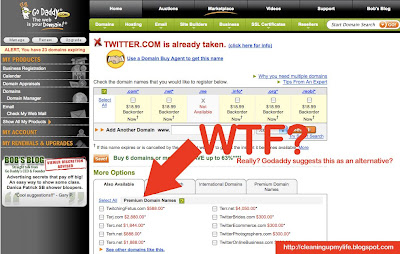 I would type the suggestion, but I'd hate for that to be indexed on a Google search with my name on it.
Labels: Domain name, humor 0 Comments - Comment now!

Video removed. They took em down. Looking for a new source now. :-P

I watch CNBC regularly. This is the best description of the channel I've ever seen. 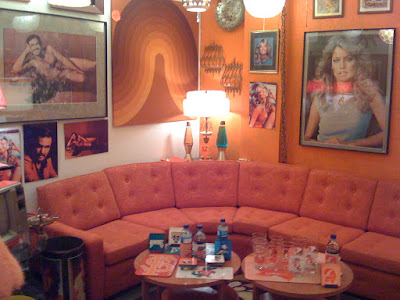 Microsoft's vision of the future.

But where is the BSOD?

Clara was around for the first depression.Take a few tips from her to survive this one in style.

House of the Dead, Overkill 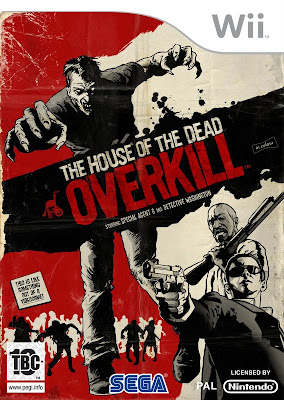 Another Zombie game is out. This time for the Wii only. I'm a sucker for Zombie games and have spent the better part of my free time in the last month playing Left 4 Dead.

Let's see how much of my life gets sucked into the abyss with this one.
Labels: Fun, games, zombies 0 Comments - Comment now!

Now if only I could find whole episodes online I'd watch the show again instead of snippets.

I pulled this movie from this post about 16 amazing mindfuck movies. I've seen most on the list, but this one I had not. Enjoy.
Labels: free video, movie 0 Comments - Comment now!

Layoffs suck. But what is little appreciated is that they are great catalysts for change. I have now been laid off two times. The first was back in 2000 during the first recession to hit our industry. The second was last month. The first led to better things, I'm sure the second will as well. 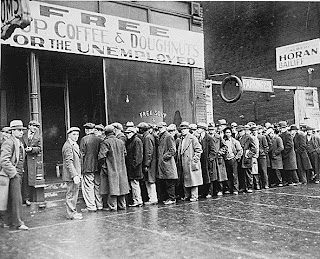 I'm exploring all kinds of possibilities from starting something new to joining one of many companies that are better and more likely to succeed than MySpace, which was the last place that I hung my hat.

For those of you who don't know - mainly because I was never allowed to blog about anything work related until now - I co-founded FIMLabs, an R&D arm of FIM. Our quiet little group created products like SpringWidgets.com, the new design for the MySpace Mobile iPhone, Blackberry, Android and Wap and a lot of other things for Fox Interactive Media and MySpace including several top secret initiatives, MySpace and MySpace product designs and redesigns, new product prototypes and new ideas with completely fleshed out business models.

My team and I started the company from the inside and Influenced several tens of millions of dollars in revenue by doing so. We were integral to the creation of several very successful products, were the most prolific patent producers at FIM, had close to a 100% retention rate and we were probably the most frugal company that Rupert Murdoch owned, though I doubt that he knew anything about us.

I did get the chance to hang out with a childhood friend of Rupert's while traveling on FIM business and from his description Rupert sounded like someone that I'd have enjoyed meeting.

I personally met with and gave advice to everyone from the CEOs of both FIM and MySpace on down and in some cases, had they listened, my suggestions could potentially have allowed MySpace to remain the number one social network instead of on a fast track to third fiddle. But that is fodder for a book and not a blog post. (publishers, feel free to contact me at your convenience) 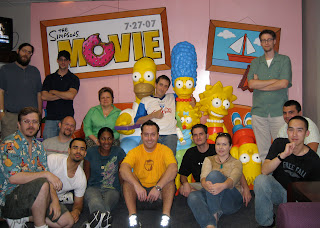 The best part of the last few years has been working with my team: The bright shiny people in this picture. (except for Bart, Lisa, Homer and Marge, who are in my garage waiting for an eBay sale) The picture is missing a couple people who joined after we took this, but this is the only group picture that I have)

We shared blood, sweat and tears as we climbed Mount MySpace trying to make a positive influence and meeting new challenges at nearly every step. Working at FIM has been a hard road, but my teammates made it a worthwhile journey.

I've been spending most of the last month trying to get members of my team work to do or jobs to take. As for my situation - I'm pretty well padded and have some time to consider options. Perhaps I'll use the next few months to try and start cleaning up my life again ;-) Maybe visit a soup kitchen and work the ladle? Maybe I should become human again.

Alas... I have time to consider the options. 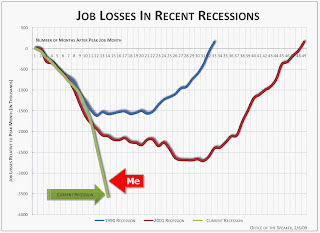 For your amusement, I've added myself to the chart in this picture (original found here). The picture itself is a pretty scary image and I'm wondering when the curve back to normal happens. As I've mentioned in previous posts, I do think it could be a while. Potentially years.

Here is to hoping that Obama has the vision and the right people to get things fixed. In the meantime, it might get ugly. I'd recommend that you pretend like you are about to get laid off as well and save accordingly.

If you are interested on knowing more about me, check out my linked in page: Don on LinkedIn

If you owe me money, here is your chance to pay me back with perfect timing ;-)

I don't care if its an ad, its addictive 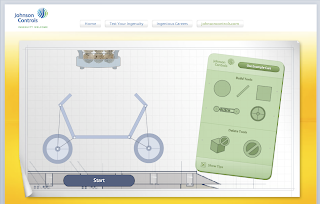 A while back I posted a link for a car that drove on physics, all of that was automatic. The car would evolve over time and keep hammering through the versions until it could drive the furthest.

This ad does pretty much the same thing, but there is no automated evolution, you are responsible for making any needed changes to drive farther. The goal is to deliver as many coconuts in the shortest time possible as you can. Once you start you really can't stop.

Bravo to whoever thought this up. It's a heck of a time killer and one of the few ads that I've ever bookmarked and the first that I have ever blogged about.

Play for yourself here, can you beat my score? 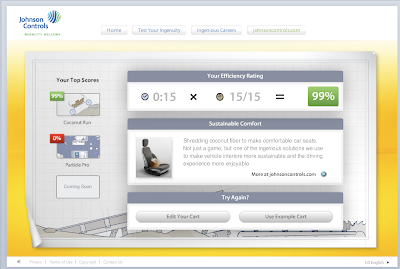 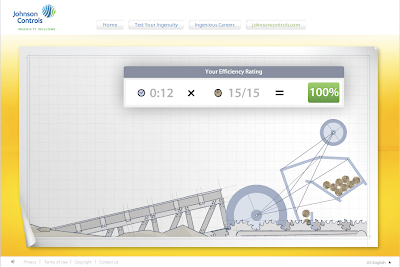 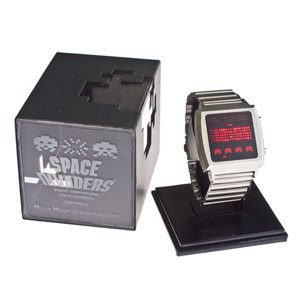 I swear that I had one of these, how awesome! Now if only I could find it. You can buy one here. I I was a big fan of technology when I was growing up and I spent every dollar I had on comics, games and cool spy gadgets, like this watch which would allow spys to play Space Invaders when waiting for enemy spies.
Labels: Fun, games, retro, toys 0 Comments - Comment now!

All things new are old again

Breaking, Newspapers predict their own deaths

Ain't that a funny thing. And they are using TV to do it.

While playing with Hulu.com, I decided to watch The Manhattan Project today and thought you might want to as well.

It's a really bad/good movie from the 90's about a boy who invents an atomic bomb for his class science project.

Of course, in real life the kid would have been shot dead in many of the scenes but I like the way this plays out a bit better.

Too intense for words

My eyes are burning and I only made it through the first 30 seconds.

Um... you mean that rich people might default on their mortgages too?

Douglas Adams - Parrots, the Universe and Everything

To any friends who also share a love for Douglas Adams.