The most disgusting cold treatment ever... I'm serious.

Nothing special or amazing about my being sick, I'm not diseased or frail. These episodes had always been variations on the common cold that just decided to show up at the most inconvenient time they could. It's almost like getting sick around the holidays was a tradition.

The last few years, I've not been sick at all. I don't remember exactly how many sick days I've taken in the last five years, but I could count them on one hand. Most of those required the emergency room and stitches - My getting "sick" for a day is pretty odd. Staying home for the day was even more unusual.

But far more unusual is this new cold treatment that I've just been put through. Maybe unusual is not the best word. "Disgusting" is a better word. 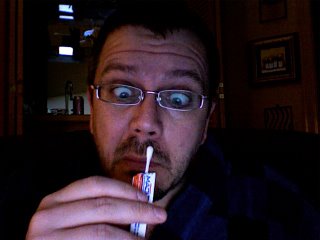 In addition to the Vitamin C and other cold remedies that I've tried this time, I was given something called ZICAM. Now, usualy the process of being sick is gross enough. There is a lot of spitting, coughing, snot and other really gross stuff that just kind of goes with the territory. You accept the fact that when you are sick, it will be gross.

ZICAM is a treatment where you stick a "Gel swab" up your nose and spread medication all around for a specified period of time.

Who thought of this?
Labels: Funny, I'm Sick